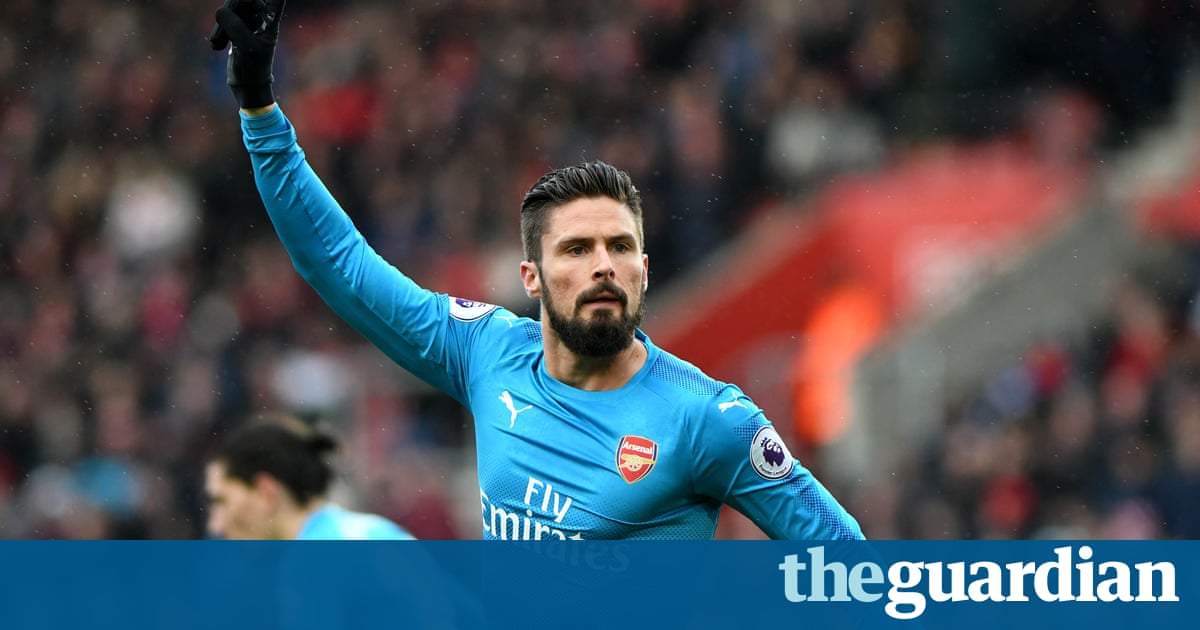 When Arsne Wenger made his third and final substitution, with Arsenal trailing and struggling for penetration, the travelling supporters groaned. Alexandre Lacazette had shown flashes of his threat but he was the player to make way. Surely Arsenal needed their leading scorer on the field.

The move proved to be a game-saving masterstroke. Not for the first time, the striker who keeps Lacazette out of the France team made an impression from the bench. Olivier Giroud has not started a Premier League game this season but he now has four goals in the competition plus three more in the Europa League.

It was his late header, glanced home from Alexis Snchezs cross, that earned Arsenal their point and wrestled some of the attention away from another diabolical opening to a match. The emphasis was on some. Wenger had wanted to bounce back from the Manchester United defeat last Saturday and, in order to do so, he had spelled out the importance of a fast and focused start. The message did not get through.

Arsenal were a shambles in the early running and they trailed to a fine Charlie Austin finish. The striker has found his form and he now has four goals in three league starts. He and Southampton might have had more. But Giroud would deny Mauricio Pellegrino the statement victory he craved and, if it did not reignite Arsenals campaign for a top four finish, it was infinitely preferable to the defeat at which they were staring.

Wengers team were 2-0 down against United after 11 minutes and the damage here could have been similar or worse. Austin might have had a hattrick inside the opening eight minutes. Pellegrino caught Wenger cold with his approach, with Southampton using a back four when they had the ball and switching to a wing-back system when they had to defend. James Ward-Prowse made the extra man at the back on the right. Arsenals shocking looseness also contributed.

I felt that the Manchester United game played a bit of a part in the heads of our defenders, Wenger said. They were again a bit apprehensive to start well. Thats why sometimes its not too good to talk about a problem because you create an even a bigger one.

Dusan Tadic found space early on and it was the attacking midfielder who ushered in Austin for the breakthrough. Per Mertesacker, who had come into the Arsenal back three for the injured Shkodran Mustafi, was guilty of a stray pass and Austin sent it forward first time for Tadic. He had worked himself goalside of Mertesacker and, when Austin continued his run, Tadic found him. Austin took a touch to set himself before finishing with the outside of his right boot.

Austin had scored goals against Arsenal during his time at Queens Park Rangers and he was in the mood here. Tadic played him through in the fifth minute but, from a slight angle, he watched Petr Cech plunge to his right to make a save while Austin rattled the upright shortly afterwards from Nathan Redmonds cross only to be pulled back for offside. Moments earlier, after Hctor Bellern had given the ball away, Austin was fractionally offside as he burst through.

Arsenal stabilised. Lacazette came into the game as the first half wore on and he was at the heart of a counterattack that followed an overhit Southampton corner. Bellern made the final pass for him but Pierre-Emile Hojbjerg stretched to make the saving challenge and prevent what would have been an ugly inquest.

Cech had to be alert to punch clear a Ward-Prowse free-kick that swirled on the breeze but Arsenal might have equalised on 33 minutes when Snchez cut the ball back for Aaron Ramsey. The midfielders right-footed first-time connection was sweet and the ball flew towards the near corner. Fraser Forster got down sharply to save. Lacazette also shot high before the interval from Bellerns cutback.

The feeling nagged that Southampton could live to regret their failure to capitalise more fully on their early purple patch, although they threatened on the counterattack in the second half. Oriol Romeu hit the crossbar with a thunderous 25-yarder while Tadic played in Ryan Bertrand on 66 minutes after more terrible Arsenal defending this time by Laurent Koscielny but he could not finish. Pellegrino was entitled to point out that his team had created more clear-cut chances. We didnt control the ball but we controlled the game, he said.

Wenger switched to 4-2-3-1 when he changed Mertesacker for Danny Welbeck while he gave the travelling fans the substitution they had been chanting for when he introduced Jack Wilshere. Then came Giroud for Lacazette; the boos were loud.

Arsenal pressed hard in the second half, with Southampton camped in their own half, but they struggled to break down their hosts defensive structure. Snchez worked Forster with an 85th-minute free-kick but that was pretty much it until Giroud got in between Virgil van Dijk and Maya Yoshida to fashion the sting in the tail.